Our meal this Wednesday, November 12 was superb; not only because it was Greek but also because Sweet Diane cooked it.

She started with luscious spring Asparagus wrapped in Prosciutto and very lightly fried. The fact that the asparagus was fresh and newly picked made the dish perfect with the meat dripping its juices onto the asparagus for added flavour.

Diane’s second course was also a beaut: she sliced, rather than cubed some new Royal Blue potatoes and then fried them while watching carefully as they crisped. She served these lovelies as a separate course as well she should: they tasted wonderfully.

The main course arrived after the chaired indulgee watched carefully as the Lamb Chops purchased that afternoon were first marinated in olive oil infused with Oregano and Garlic. After two hours I watched as she fried them in a ribbed grill pan; we had a treat when we had two chops rather than the usual one. The chops were delicious but a little tougher than last week’s; the spring lamb was still very tasty.

We enjoyed an Australian Clean Skin which is the name given to wines that are over stocked and must be discounted but without denigrating the vineyard’s name. Diane likes wine from Coonawarra so she picked one from that region and it sure paid off. 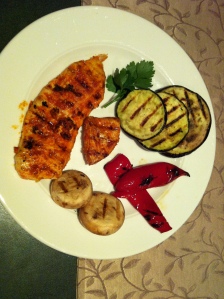 This shows the greek yoghurt sauce and the low oil dressing

One of our trusty grill plates

Scallops and Peas in broth

Diane put the grilled seafood in a broth. 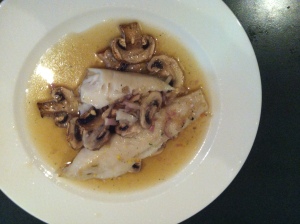 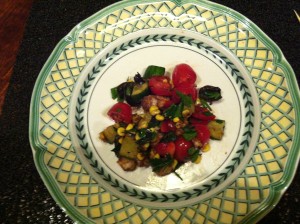 Here are some photos of the delicious meals we have prepared on our two days each week of eating restricted calories. The main rules are to eat normally for five days and on two nonconsecutive days we eat limit ourselves to: 500 calories (about 4,000 kj) for Diane and 600 calories for me. This limit precludes wine so we have water with a dash of lime or cranberry juice.
The main meal for us is dinner and the meat component is about 100 grams (3 ounces) . Prawns, non oily fish and chicken are all low in calories for these meals. Grilled vegetables and salad with a greek yogurt and stock dressing complete the meal.

Last night I returned to a favourite Bernard recipe for fish baked on a bed of sliced mushrooms flavoured with a sprinkling of chopped shallots and moistened with stock enriching the contents of the baking dish.

The only difference in the recipe was the type of fish and this time it was my favourite saltwater fish: Patagonian Toothfish.  This dish is a perfect low-cal meal because I believe that it is absolutely delectable but with very few calories: the contents being mushrooms, fish and a little stock.

I have made the dish with about three different kinds of fish and they have all been good.  The Toothfish may be better lightly fried but considering the ease of preparing the dish in the oven I would opt for this method of cooking.

I made a our normal green salad with water as an accompaniment.

Last night Diane made one of my favourite meals: a breaded, fried chicken schnitzel.

Before this main course I sliced some beautiful Swiss Brown mushrooms which Diane then fried in butter and we had them as a first course.

She then made the main by dredging the thinly sliced and flattened chicken breast pieces first in flour, then lightly scrambled egg and then in coarse bread crumbs before being lightly fried.  She served these with baked potato wedges that had been lightly fried after a dusting of smoked paprika.

After this delicious main Diane served a French brie.

As a beverage we enjoyed a bottle of 3 Corners Enterprise Chardonnay.

Yesterday I made my old standard dish from Bernard’s cookbook La Cuisine: Fish Fillets Over a Bed of Mushrooms.

The recipe is a good one; we both like fish and it is a very low caloric meal but tasty in the extreme.  She calls for a finely chopped shallot sprinkled over the mushrooms and stock (we always use Croatian Vegeta) filling the bottom of the baking dish to several millimeters–nothing else.

Earlier in the day I had wheeled over to the local shopping centre and bought some pre-packed Silver Tailed Snapper, a new fish for this dish but one that worked very well by our standards.  That and a reduced bowl of salad and a big glass of water made an excellent low-cal meal.

Yesterday was a doosie (that word choice sure dates me!)  As a Valentine’s Day present to me Diane made me something for breakfast that I had only heard rumours about and that was Blueberry Pancakes and they were wonderful!

After that very filling start to the day there was no need to have any lunch so the evening meal  became the centre of the day’s celebration and what a celebration it was.  We had made an order with our local fishmonger, who by the way is very good, for one dozen Coffin Bay oysters and four local Blue Swimmer crabs.  At this time of the year the crabs are  large and these four did not disappoint!

Diane made a traditional French Shallot and Red Wine Vinegar dressing to go with the oysters.

As a little sauce we just used a purchased French Maille Tartare sauce but not nearly as good as the one that Diane has always made to go with the crab; this was just an unfortunate experiment that will not be repeated.

We have not had crabs for about two years; I believe this ocurred because their numbers have been heavily down but the monger says that supplies are good this year and demand is heavy.

As a palate refresher, Diane made us a Greek inspired salad of cucumber, Kalamata Olives and tomato pieces with a light Greek yogurt dressing.  As a beverage, we bought a bottle of French Grandin champagne which was a perfect accompaniment.

And so ended a delightful Valentine’s Day for 2013!

To begin our meal last evening, Diane made up a little anitipasti plate of delicious  dried olives, mushrooms, cherry tomatoes and sliced parmesan.

For the main she prepared a new dish for our table but one that she had made at a cooking school in Bolonga, Italy some years  ago; it was linguini with prociutto pieces and lemon zest.  It sounds so simple and like the best Italian pasta dishes in was but the proof was in the eating and it was superb and this is coming from a person that has never eaten the dish.  The lemon zest is so strong that it has a magical taste that is truly worth preparing for yourself just to try it.

Di prepared a cleansing green salad and the meal was accompanied by a bottle of Australian Clean Skin wine (no label).

Yesterday there were more than the usual elements to the day’s food.  Diane and I had a Garden City Day: brekky, lunch and a movie.

We started off with a ham and cheese croissant at Croissant Express.  It is usually something to anticipate but yesterday, not only was it he hated too fast but their normally excellent, flaky croissants were bakery dough rather than being flaky.

Unfortunately lunch was off too: the normally anticipated Dim Sum train with its collection of delicious delicacies was underwhelming this time.  We took the same things off the conveyor but they tasted old.  Maybe because it was Monday and they were the leftovers, a new chef–who knows, ?

That night I fixed a simple meal: broiled salmon pieces with sauteed potatoes and a green salad.

The salmon pieces were simply brushed with olive oil and placed under the grill; the potatoes were par boiled then fried with smoked paprika and a little garlic salt; simple yet delicious as only grilled salmon can be.

As a beverage, we finished off the remainder of the Spanish Rioja from the previous night.

Last night Diane made us a wonderful Spanish meal.  She began with the Spanish version of Italian bruschetta but this Spanish version is considerably simpler than the commercial one asvailable around the world today.  This Spanish version starts with toasted bread rolls, which are then rubbed with a halved garlic clove and then rubbed with a halved tomato or in Diane’s version halved cherry tomatoes that were then left on the bread.  I have read hat the Italians have a very similar version using their own crusty bread.

The second course was a real winner: green beans with chopped tomatoes, chives and pine nuts.  The beans were parboiled very gently so that they were, importantly, still crunchy.

For the main course she BBQed a chicken half; I took my favourite, the thigh while Di took her favourite, the breast.  She had marinated the chicken in the same marinade but with new ingredients, that I had used with the Mexican chicken several nights ago.  This time, keeping to the Spanish theme, she made a delicious romesco sauce which is really Catalan in origin.

The sauce is composed of ground toasted almonds, sweet peppers, garlic and bread crumbs to which olive oil is added as the liquid.  There are many variations but these are considered the standard ingredients.  It is a versatile sauce that can be used with fish, chicken or lamb.

Last night’s meal was a simple one befitting the on slot of about five days of 40+ (100+) degree weather.

Diane made an excellent fresh tomato pasta sauce that married perfectly with 160 gr. of spaghetti.  It is amazing how good tomato puree with onion, oregano, garlic and a little sprinkling of chili flakes tastes and how easy it is to prepare; the Italians had fast food centuries ago and that fast food does not have the delirious effects of contemporary industrialized agriculture.

She served a caperberry salad with diced potatoes, cherry tomatoes, olives, red onions and rocket with a special dressing.  It comes from a Readers Digest book of salads that Di bought me in ’09 as a Christmas present to encourage me in more low-cal meals and it contains very good composed salads of many kinds.

This delicious summer meal was accompanied by one of the great wines of the world (by my totally uneducated palate): a Riparosso Illuminati, Montepulciano d’Abruzzo; the connection with the Illuminati is completely unknown to me but it certainly brings many untethered thoughts to mind.

Tim's Tucker
Create a free website or blog at WordPress.com.